After looking at the scenes below it is awfully hard to believe that this can been seen by any one as beneficial to the citizens of our country.  The government dollars that have to be used to clean up this mess should be charged to these ungrateful bastards.  Once again get a job.

“During the first two months of the nationwide Occupy protests, the movement that is demanding more out of the wealthiest Americans cost local taxpayers at least $13 million in police overtime and other municipal services, according to a survey by The Associated Press.

The protesters got tired of being called aimless college kids without a mission so they relesed the following.

As one people, united, we acknowledge the reality: that the future of the human race requires the cooperation of its members; that our system must protect our rights, and upon corruption of that system, it is up to the individuals to protect their own rights, and those of their neighbors; that a democratic government derives its just power from the people, but corporations do not seek consent to extract wealth from the people and the Earth; and that no true democracy is attainable when the process is determined by economic power. We come to you at a time when corporations, which place profit over people, self-interest over justice, and oppression over equality, run our governments.

We have peaceably assembled here, as is our right, to let these facts be known.WHILE CREATING A COSTLY MESS THAT THE REMAINING 99% MUST PAY TO CLEAN AND ENFORCE.

They have taken our houses through an illegal foreclosure process, despite not having the original mortgage. -BUT WE REALLY WANTED THAT HOUSE THAT WE COULD NOT AFFORD, HOW DARE YOU TAKE IT IF WE CANNOT PAY FOR IT.

They have taken bailouts from taxpayers with impunity, and continue to give Executives exorbitant bonuses.-EXECS ARE PAID BONUS BASED ON SHARE PRICES WHICH ARE DRIVEN BY YOU THE 99% SHAREHOLDERS. SHIFT YOUR FOCUS OFF THE BOTTOM LINE AND BACK TO CUSTOMER SATISFACTION IF YOU WANT A CHANGE.  EXECS ARE JUST A TALKING HEAD FOR THE CORPORATION WHICH IS FUELED AND INCENTIVIZED BY THE SHAREHOLDERS.

They have perpetuated inequality and discrimination in the workplace based on age, the color of one’s skin, sex, gender identity and sexual orientation.-AGAIN ARE MERE PUPPETS ACTING ON THE WANTS OF THE SHAREHOLDERS, THIS DISCRIMINATION CARD WILL ALWAYS BE PLAYED, NO MATTER WHAT. PLENTY OF VERY SUCCESSFUL MINORITIES OUT THERE.  NOT SAYING THAT PEOPLE AREN’T WRONGFULLY DISCRIMINATED ON BUT DISCRIMINATION IS HARDLY THE UPPER CRUSTS WALL STREETS ISSUE, WHEN IS THE LAST TIME YOU HEARD OF A CEO HIRING A BRANCH MANAGER OR A TELLER/BROKER. THE 99% DO THE HIRING AND FIRING.

They have profited off of the torture, confinement, and cruel treatment of countless nonhuman animals, and actively hide these practices.  YET ANOTHER PRACTICE THAT IS A RESULT OF THE CONSUMER.  CONSUMERS WANT TO PAY THE ABSOLUTE LOWEST PRICE FOR EVERYTHING AND DON’T WANT TO ACCEPT THE THINGS THAT MAKE THAT WAL-MART POSSIBLE.

They have continuously sought to strip employees of the right to negotiate for better pay and safer working conditions. ANOTHER ISSUE OF THE MAJORITY OF AMERICANS NOT WILLING TO PAY FOR GOODS AND SERVICES THAT THEY WANT.  IT IS SAD THAT WE THINK OUR TIME IS PRICELESS BUT WE ARE UNWILLING TO SEE THE VALUE IN OTHERS.

They have held students hostage with tens of thousands of dollars of debt on education, which is itself a human right. REALLY SEE PREVIOUS POST ABOUT GREEDY STUDENTS THAT CANNOT LIVE UP TO THEIR OBLIGATIONS.  NO ONE FORCED THEM TO TAKE OUT A LOAN, IT WAS THEIR CONSCIOUS DECISION TO SIGN.  THEY WANT RIGHTS AND FREEDOMS AT 18, HERE YOU GO, NOW MAN UP.

They have consistently outsourced labor and used that outsourcing as leverage to cut workers’ healthcare and pay. AGAIN BASED ON THE 99% NOT WILLING TO SEE VALUE IN AMERICAN WORKERS TIME.

They have influenced the courts to achieve the same rights as people, with none of the culpability or responsibility.

They have spent millions of dollars on legal teams that look for ways to get them out of contracts in regards to health insurance.

They have sold our privacy as a commodity. WELCOME TO 2011 AND THE AGE OF TECHNOLOGY, THE EXPECTATION OF PRIVACY IS A VERY TINY THING THESE DAYS WHEN YOU AIR YOUR DIRTY LAUNDRY ONLINE ON YOUR iPHONE FOR ALL TO SEE.

They have used the military and police force to prevent freedom of the press. SEE THE PICTURES BELOW.  YOU CANNOT GET YOUR POINT ACROSS LIKE A REASONABLE ADULT

They have deliberately declined to recall faulty products endangering lives in pursuit of profit. CAUSE YOU DEMNAD THE CHEAPEST THING AND YOU CONTINUE TO BUY IT, ENTER THE FORD PINTO.

They determine economic policy, despite the catastrophic failures their policies have produced and continue to produce. SOMEONE STEP UP AND OFFER YOUR GREAT IDEA PLEASE..HERMAN CAIN ANYONE…

They have donated large sums of money to politicians supposed to be regulating them. They continue to block alternate forms of energy to keep us dependent on oil. AGAING THE WILLINGNESS TO PAY FOR THESE ALTERNATIVES, HOW MANY PEOPLE OUT THERE PAY THE EXTRA FOR “WINDTRICITY” NOT ALLOT.

They continue to block generic forms of medicine that could save people’s lives in order to protect investments that have already turned a substantive profit. WE DEMAND SPECIFIC REQUIMENTS FOR OUR “SAFETY”

They have purposely covered up oil spills, accidents, faulty bookkeeping, and inactive ingredients in pursuit of profit. IF THEY REMOVED THE ETHANOL AND AND JACKED THE PRICE OF EACH GALLON BY A FEW BUCKS WOULD YOU BE UPSET?

They purposefully keep people misinformed and fearful through their control of the media. SINCE WHEN HAS THE MEDIA BEEN A TRUSTWORTHY SOURCE WITH GOOD OR BAD INFORMATION.

They have accepted private contracts to murder prisoners even when presented with serious doubts about their guilt. ARE THEY REFERRING TO ABU GHRAIB HERE?

They have perpetuated colonialism at home and abroad. They have participated in the torture and murder of innocent civilians overseas. THE INNOCENT ONES THAT TOOK LIVES OF THREE THOUSAND ON 9/11.  PUT YOUR SELF IN THE SHOES OF THOSE WHO LOST THERE CLOSE FAMILY.  I WOULD AGREE THAT BURNING ALIVE OR JUMPING OUT OF A HIGH RISE BUILDING IS A FORM OF TORTURE THAT WAS GIVEN TO US ON THAT DAY.

They continue to create weapons of mass destruction in order to receive government contracts. ARE YOU SUGGESTING WE REMAIN DEFENSELESS TO THE WORLD IN THE EVENT OF A TRAGEDY?  YOU WOULD PROBABLY CALL OFF THE OCCUPATION IF N. KOREA STARTED DROPPING BOMBS AND BBQ’ING YOUR FAMILY AND WE HAD RESPONSE.

To the people of the world,

We, the New York City General Assembly occupying Wall Street in Liberty Square, urge you to assert your power.

Exercise your right to peaceably assemble; occupy public space; create a process to address the problems we face, and generate solutions accessible to everyone.

To all communities that take action and form groups in the spirit of direct democracy, we offer support, documentation, and all of the resources at our disposal.

Join us and make your voices heard! I THINK IT IS TIME TO REEVALUATE THE MISSION AND THE GOALS AND SEE IF THIS IS STILL A FORWARD MOVING INITIATIVE AND NOT JUST A WASTE OF TIME AND TAX PAYER MONEY. 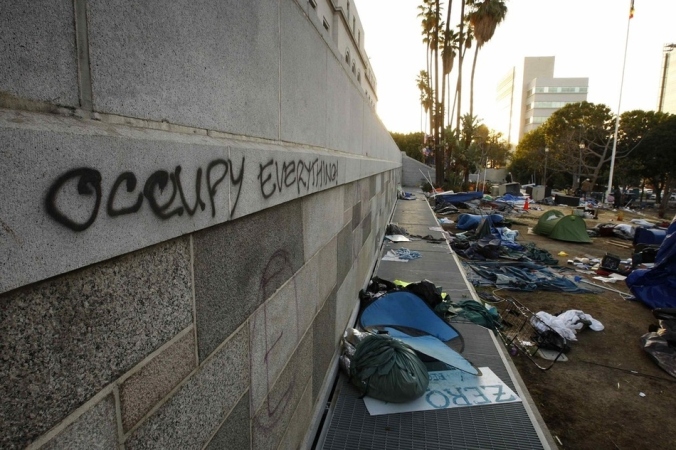