For the long weekend I decided to check out the Chilcotin area and Cariboo region that I have heard so much about.   With no real plan other than to see the Gang Ranch and end up in Bella Coola, BC I headed north. 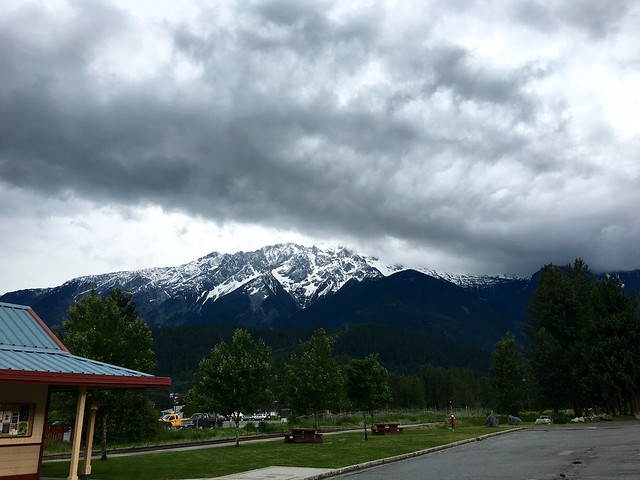 Seattle to Hurley Pass BC

Pulled out of Seattle around 3pm and headed North on I5 to Sumas to drop off a jacket that I sold. After the exchange and stop at Tim Horton’s I headed north on 99 with a burger in Pemberton in my sights. Stopped at the favorite eatery in Pemberton, The Wood, for a delicious burger before grabbing some beverages for the evening. I Headed out Pemberton Meadows to attack the Hurley before it got too dark, with the long days there was plenty of time to get over the pass. After summiting and starting the descent I pulled off and camped just over the summit along the river. Great remote spot with amazing views. After a few BC brews to dull the thought of becoming a bear snack, I passed out to the sound of the glacier fed river near the tent. 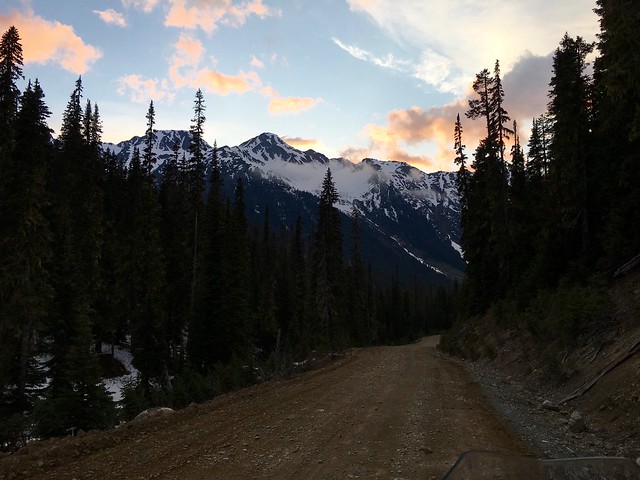 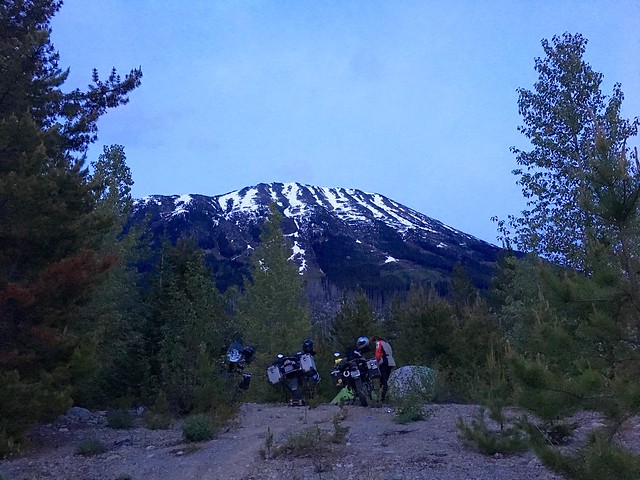 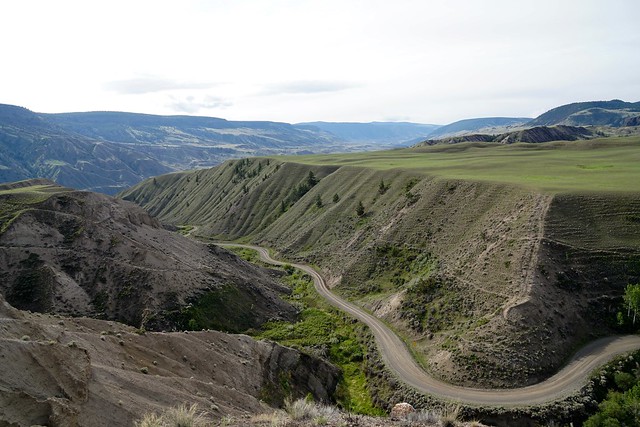 Got up at a decent hour, made some coffee and Spam breakfast burritos before heading out of camp on the first real morning. The road down to Gold Bridge is pretty tame, allowing you to take in the ample views on the way down. After crossing the river in Gold Bridge there is a section of surprisingly good pavement almost all the way to the dam at Carpenter Lake. I watched the crew at the dam picking up driftwood for a while then headed in to Lillooet to refuel and grab some snacks for lunch. Headed north out of town to W Pavilion Rd and set the GPS to the Big Bar Ferry. By this time it was 1pm and the last ferry run was at 6PM if I recall, so I had plenty of time. As the canyon started to open up to some amazing views so did the sky making for some baby shit like conditions on the road. The baby shit definitely slowed progress on the 1200 but nonetheless made it to the ferry in plenty of time. The canyon heading in is quite the sight to see, so much wildlife and many views along that stretch. Boarded the cable ferry and spoke with the captain during the crossing, what a guy. He has seen some shit.   Took the road out of the canyon, once across the ferry and headed toward the ranch. The road traverses some farm land and huge grazing ranches across an abundance of cattle guards. The slick conditions continued, dry and fast in some and slick as hell in others. After almost going down while hauling ass around a super slick corner I decided to take it slow since I hadn’t seen anyone pass in a while. Might be sitting in agony for a while if I kept up my shenanigans. Crossed the Gang Ranch bridge and setup camp on one the bluffs looking over the river. It was an epic place to camp. While it’s not an “Approved” campsite I was way out of sight and took care to leave it untouched when I left. Didn’t see anyone the whole night other than cattle which made sleeping a bit easier. The mindset was that cows would be an easier and tastier target for the bears than a stinky dude on a bike.

Waking up on the ranch was epic! After coffee and breakfast I headed out of the ranch and set the sights on Farewell Canyon. The rain held off for most of the morning so it was a quick trip out. Sent the drone up and got some epic aerials of the canyon surround area. This area is worth the trip alone! Took in all the cool scenery I could as it rained and headed north to find some fuel. Fuel is a little short in these parts but the little reservations usually have it if you have CAD cash. After fueling up I headed west to Bella Coola. The highway there is pretty uneventful till you get to Tweedsmuir park which is gorgeous and fairly untouched. After leaving the park you start to head over “The Hill” which is the pass that leads down to town. Bella Coola being much smaller than I expected the food selection was not great but I found a spot to grab a burger and a shower was in order so got a hotel for the night. Headed down to the marina after dinner and grabbed some shots around dusk of the old cannery. BC has a ton of interesting maritime history. Got some Kokanee’s from the hotel, showered and hit the sack. 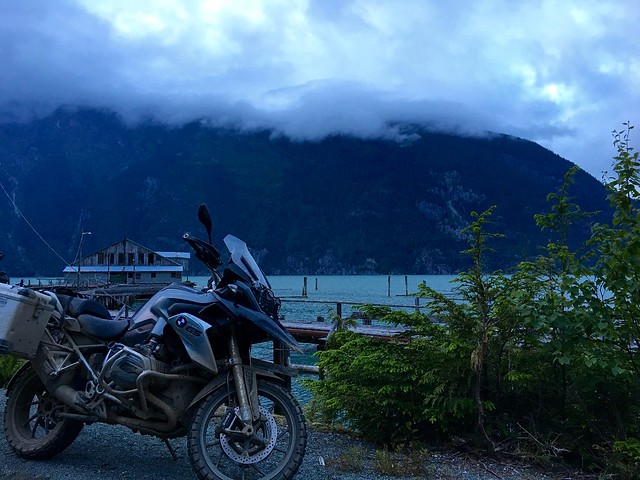 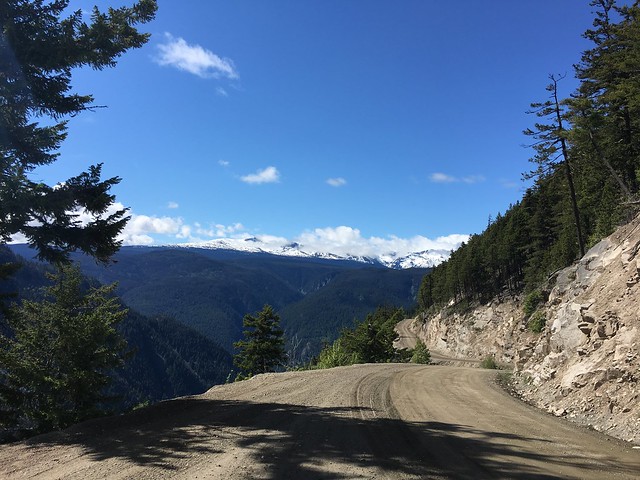 Packed up and headed out after a quick continental breakfast at the hotel. Today was mostly back tracking the previous day so not much to report other than a bear sighting in the park. Stopped in Williams Lake to get some provisions for the night and enjoyed the great sunset with a campfire at Watch Lake. 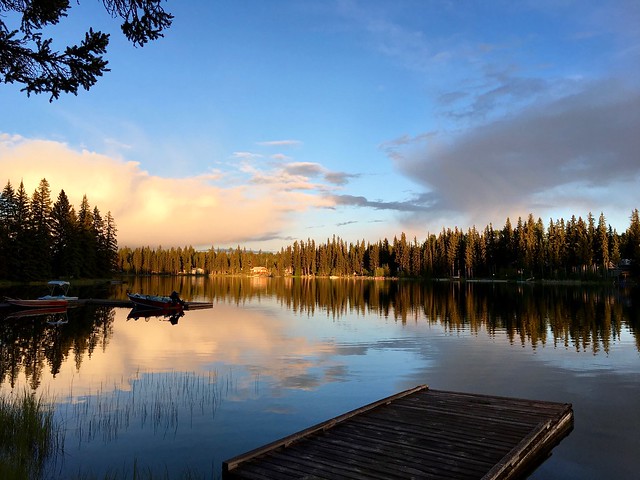 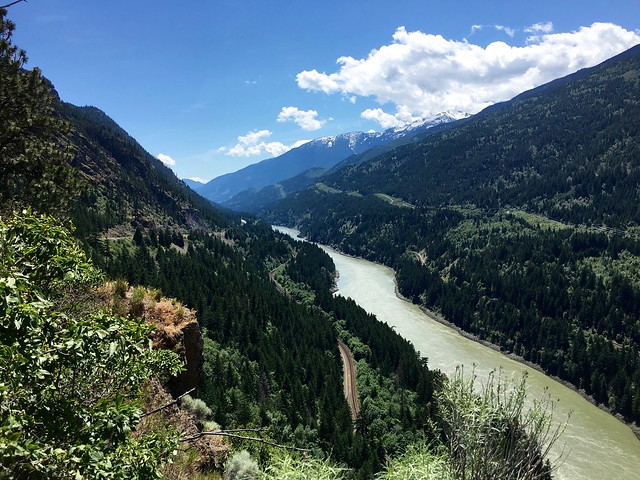 Loaded up the bike one last time and headed south with home in sight. The weather was great and the roads were nice. Boston Bar, Hell’s gate and riding along the river were fantastic. Sent the drone up one last time at one of the overlooks and got some good river footage. From Hope BC to home is pretty uneventful but provides a good transition back to the day to day routine.

All in all was a great trip that is worth going back to see. I would cut out the long trip out to the coast since other than the park it is pretty uneventful. The ranch and canyon is amazing and I will be back to explore further. END OF REPORT